What's So Green About Green Burial?

In simplest terms, a natural or "green" burial returns a body to the earth to decompose and recycle naturally. The body is prepared without chemical preservatives such as embalming, and is buried in a cloth shroud, or a casket made from locally harvested wood, wicker or other biodegradable materials. Natural burial grounds may also use grave markers that don't intrude on the landscape, such as shrubs, trees, or a flat, indigenous stone, which may be engraved.

It's been receiving a lot of attention lately, but it's hardly a new idea: this is what most of humanity did for millennia, before the rise of the new "traditional" funeral practices that are energy-, material- and chemically-intensive. The simplicity of a green burial could leave out a few things, such as the...

that are buried along with human remains in the 20,000-some cemeteries just in this country every year.

There are not yet any formally designated natural burial grounds in Idaho, but our neighboring states have some. The White Eagle Memorial Preserve in Goldendale, Washington was founded in 2008 and licensed by the state of Washington. A 20 acre cemetery is set within 1300 wild acres of permanently protected oak and ponderosa forest, meadow and steppe on the edge of Rock Creek Canyon near the Columbia River Gorge National Scenic Area.

Lakeview Memorial Cemetery & Mortuary in Bountiful, Utah, began offering a green burial option in September of this year, with a dedicated section of their cemetery.

As more people become interested in environmentally sustainable lifestyles, they will want their final choices to be in keeping with how they lived their lives. And cemetery managers will recognize the wisdom of providing what people want—if only we ask them for it.

The cemetery district commissioner for the Fern Prairie Cemetery north of Camas, Washington got the idea of natural burial from a customer at a cemetery in Vancouver (where he works as a groundskeeper) that requires concrete grave liners. He found out there was no reason Fern Prairie couldn't offer the service, and they started earlier this year. 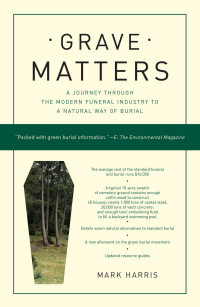 Mark Harris' book, Grave Matters: A Journey Through the Modern Funeral Industry to a Natural Way of Burial chronicles the experiences of families who found in green burial a more natural, more economic, and ultimately more meaningful alternative to the tired and toxic American way of death. For some families that meant burying their loved ones in natural cemeteries or at sea. For others it involved conducting home funerals, hiring local carpenters to furnish simple pine boxes, or casting ashes into memorial reefs.

The book provides information about burial options, probable cost, availability and location, and is now out in paperback, updating material from the hardcover and reporting on the phenomenal growth of the green burial movement since the original publication in January of 2007. The new material includes: profiles of nearly two dozen natural cemeteries that have sprung up around the country, lists of almost 40 home funeral providers, information on ecocoffin manufacturers and distributors, and a new afterword on the growth of the green burial movement.

You can learn more about the book, read excerpts from the chapters on memorial reefs and natural cemeteries, or buy on-line via Harris' website, www.gravematters.us.

Your alliance has once again collected a sample of General Price Lists from funeral establishments in the state. Although the Federal Trade Commission's Funeral Rule requires providers to give you itemized prices in person and, if you ask, over the phone, it does not require businesses to be forthcoming in their advertising, nor in responding to inquiries by mail, or e-mail.

As with many industries, funeral establishments are using the web for advertising, but relatively few of the websites we were able to find provide an obvious link to an online GPL. We appreciate those businesses that do provide readily accessible price information, and take their openness as a positive indicator.

This year, we put out a request to some of our members (those who've given us an e-mail address), asking if they would be willing to help go out and collect GPLs from those businesses who didn't respond to our mail inquiry. A handful of volunteers responded (thank you!), and while we didn't get organized to the point of a full-scale, state-wide survey, we do have some new "faces" in the list. This year's survey of southeast Idaho in particular benefited from the effort of member Dave Robles.

We keep the survey as up-to-date as we can on our website, which also has links to funeral business websites if they let us know where to find them, or if we can find them on our own. That means...

The Survey is Always Open!

If you're interested in helping your alliance, and learning what it's like to shop for funeral goods and services, we'd love to have you join the effort. If there's a funeral home near you that's not on the list, why not visit them and find out what they have to offer, and how much it costs? If you send us their General Price List, we can add them to the survey, and help all the consumers in the state.

What are all these numbers?

The Basic Services fee shown in the first column reflects both an "industry practice" and the Funeral Rule's permission to providers to charge "a basic services fee that customers cannot decline to pay." Rather than requiring absolutely everything to be itemized, this catchall comprises "services that are common to all funerals, regardless of the specific arrangement. These include funeral planning, securing the necessary permits and copies of death certificates, preparing the notices, sheltering the remains, and coordinating the arrangements with the cemetery, crematory or other third parties." It can also include overhead that's not allocated in itemized pricing.

Common sense would suggest that any funeral package price would be higher than the basic services fee, but you can see that many businesses don't see it that way, and the Funeral Rule doesn't spell it out unambiguously.

Direct cremation is an indicator of the very least expensive arrangements possible from a funeral establishment, and like the Basic Services fee, it's a legally required disclosure in a General Price List. The "package price" must include any basic professional services of the funeral director and staff, but it may exclude the crematory fee. (In our survey, the prices shown do include the crematory fee.)

The package price for Immediate burial is another required GPL disclosure. Both direct cremation and immediate burial mean no "funeral service" provided by the business (but you or your church can arrange memorial services as you see fit). There's no embalming, no display of the remains ("viewing") no get-together at the funeral home ("visitation") or ceremony with the body present. The casket (or "alternate container," as the case may be) is extra, as is the cemetery plot, and the expenses of opening and closing the grave. Most cemeteries require an "outer burial container" of some sort, to keep their lawn nice and flat. Usually a "grave liner" is cheaper than a "coffin vault." The GPL is also required to provide either individual outer burial container prices or the range of outer burial container prices that are listed on a separate Outer Burial Container Price List.

In last fall's FCAI newsletter, we featured an article inspired by Miri Navasky's and Karen O'Connor's film "The Undertaking," and another brief criticism of one aspect of what was depicted in it, written by Lisa Carlson, a long time consumer activist and author of Caring for the Dead: Your Final Act of Love. (PBS aired the film on Oct. 20, 2007, and it's still available on the Frontline website.) We recommended—still recommend—the film to our readers as a fine presentation of the art of created ritual that can comfort us when our loved ones' lives come to an end. The film won an Emmy®, and reviews have been generally very positive.

Carlson's criticism was directed at the non-depiction of one element of the business: the legally-required presentation of a General Price List at the start of any discussion about funeral arrangements. Bereaved families are uniquely vulnerable, and while comfort, condolence and ritual may be much appreciated, the FTC's Funeral Rule was developed specifically to protect the vulnerable from abuse.

This September, Thomas Lynch and Lynch & Co. Funeral Directors PLLC filed a lawsuit in U.S. District Court in Michigan naming Carlson, the FCAI, the non-profit Funeral Ethics Organization that Carlson founded, and the national Funeral Consumers Alliance as defendants, alleging malicious libel and defamation. We were included for having published Carlson's statement that "in the program, the Lynches appear to have ignored the Rule, breaking the law in their dealings with at least three families."

We have no malice toward Mr. Lynch or his family business, and indeed, we offered him the courtesy of space in this newsletter to present his side of the story. He declined our offer. As a non-profit corporation acting in the public interest, we intend to uphold ethical and fair business dealings for our own part, and to encourage them throughout the funeral industry.

Since the FCAI has no business in Michigan and our sole interest was in the broad depiction of the funeral business in the media, we have disputed the Court's jurisdiction and are in the process of being dismissed from the suit.